We’ve probably all heard the term storyboarding in regards to movie making or even gaming but storyboarding is actually a key component when developing eLearning. It is a quick and effective way to communicate what your finished course will contain and what it will look like. How do you storyboard for 360 VR? We have some handy tips to share to make the process less daunting and more creative!

Why you need it

Storyboards are the blueprint for your success, you wouldn’t sit down and plan a website or learning plan without any thought of what you wanted to convey and how it would look.

A storyboard gives stakeholders and subject matter experts a preview on how the course will flow and what the content will look like. It’s a great way to make edits and changes to content before it goes into the often time consuming aspect of building the course. By doing a storyboard you are setting your course up for success, allowing the course to be ready to go once it is built instead of having to implement costly changes later.

There are a few things a storyboard must do:

What’s the difference between standard and VR/AR storyboards?

Traditional storyboarding used for eLearning uses a frame by frame method meaning everything you would see within that frame or square would be documented. For example, the imagery, text and interaction. But with 360 VR you are literally surrounded, there is no traditional frame.

Using circles rather than traditional squares are the easiest and most effective way to storyboard 360 VR. This method means you can plan what’s in front, behind and the sides of the environment. This way you can position objects within the space whilst still being able to convey sequence and interactions. These don’t have to be the final detailed 360 photographs that you will be using for the actual course. What you are aiming for is the ability to clearly see what will be on screen/surroundings and also text and interaction i.e., a hotspot, multiple choice, quiz etc.

Field of View: The extent of observable world that is seen within the scene at any given moment is known as field of view. A wide field of view immerses you into the virtual environment whereas narrow field of view can feel more like using binoculars. So think about what will be in the entire surroundings the viewer will see. Include details of floors and ceilings, horizons, ground, sky and the objects that will be part of the area. The standard field of view in a VR head-mounted display is around 94 degrees. When seated, most people can rotate their head 30 degrees to the side up to a maximum of 55 degrees and remain comfortable. These numbers increase a little when using a swivel chair or when standing up.

Oculus recommends a minimum distance of 0.75 meters for a comfortable viewing experience. It’s good to be mindful of this when placing objects in a scene so they’re not too close or too far away. Beyond 10-meters the visual skill that allows you to accurately judge relative distances between objects (3D stereoscope depth perception) diminishes rapidly until it is almost unrecognizable beyond 20 meters. So if you want your learner to have the best visual experience it’s important to bear these in mind when planning your 360 video.

Interaction: What is the learner going to be doing in this scene? Do they need to interact with particular aspects of the surroundings? Is there on screen text or audio instructions they need to listen to? You need to define what the user can and can’t do within a scene. Providing clear instructions means your learner is actually learning from the get go and not wasting time trying to figure out what’s expected.

What is the estimated point of view (POV): Where will the learner be positioned within their surroundings? There are two kinds of POV, first person and third-person. First person POV means the learner is seen through the eyes of a character as if they are actually that character. This probably is immediately what you would go for but you do have to be careful about how you position the camera when taking that 360 video.

If you set the camera in the middle of a table and you have people in your surroundings talking, or your learner has to interact with them, your learner will have to keep spinning around to gather all the information they need. Third person POV means the learner perceives the story from a removed vantage point rather than having a role within the experience. This can be useful because there are fewer chances of breaking presence compared to the first person, but you do run the risk of the learner potentially feeling like a ghost lurking around the scene. 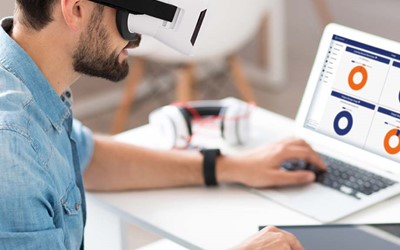